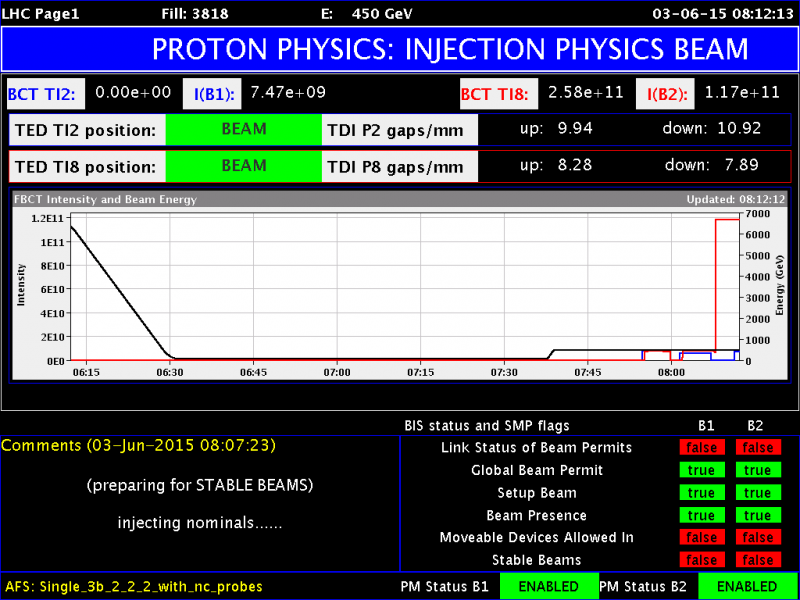 Probe bunches successfully injected! Now preparing to inject three bunches of protons into the LHC from the Super Proton Synchrotron.

Find out more about the Super Proton Synchrotron, which, measuring nearly 7 kilometres in circumference, is the penultimate machine in CERN's accelerator chain.

Physicists in the control room for the CMS experiment look up at the various display panels in anticipation of the start of the physics run (Image: Mike Struik/CERN)

You can follow the status of the LHC machine on LHC page 1. Here's an explanation of how to read this technical display.

Update: The injection of these first protons is to test a beam-position monitor at Point 6 on the LHC ring.

The LHC Operations team has just declared that, in 10 minutes, they will inject beams from the Super Proton Synchrotron (SPS) into the Large Hadron Collider (LHC). Three bunches, each containing 1×1011 protons, will be injected at the energy of 450 gigaelectronvolts (GeV). These counter-rotating beams will circulate in separate beam pipes. 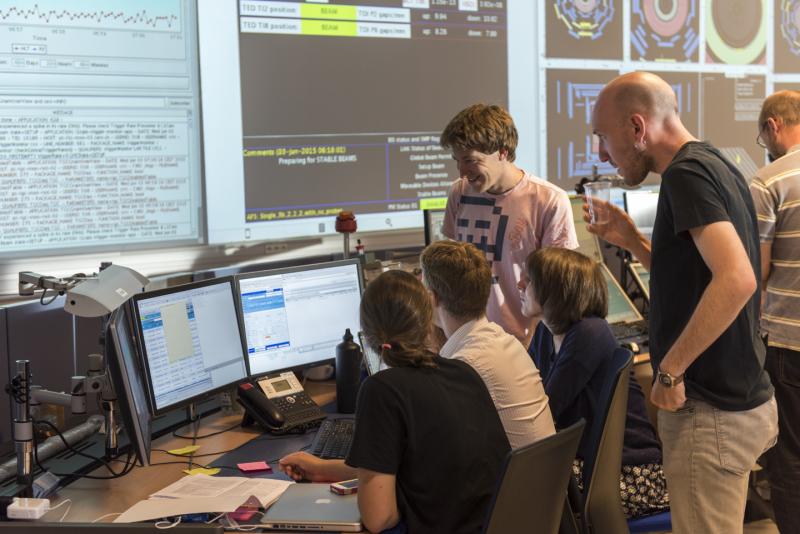 Physicists working in the ATLAS experiment control room. In the background can be seen the message on LHC's 'Page 1' information panel showing that the machine is preparing for stable beams (Image: Pierre Descombe/CERN).

If you've just joined us, good morning from #ATLAS! It's #13TeV day! pic.twitter.com/h5rtN1AcoY

The CERN Data Centre has also been preparing for the torrent of data expected from collisions at 13 teraelectronvolts (TeV).

The CERN IT department purchased and installed almost 60,000 new cores and over 100 petabytes of additional disk storage to cope with the increased amount of data that is expected from the experiments during run 2. Significant upgrades have also been made to the networking infrastructure, including the installation of new uninterruptible power supplies.

Read more about the steps they have taken to prepare for the computing challenges of LHC run 2: "CERN computing ready for data torrent" 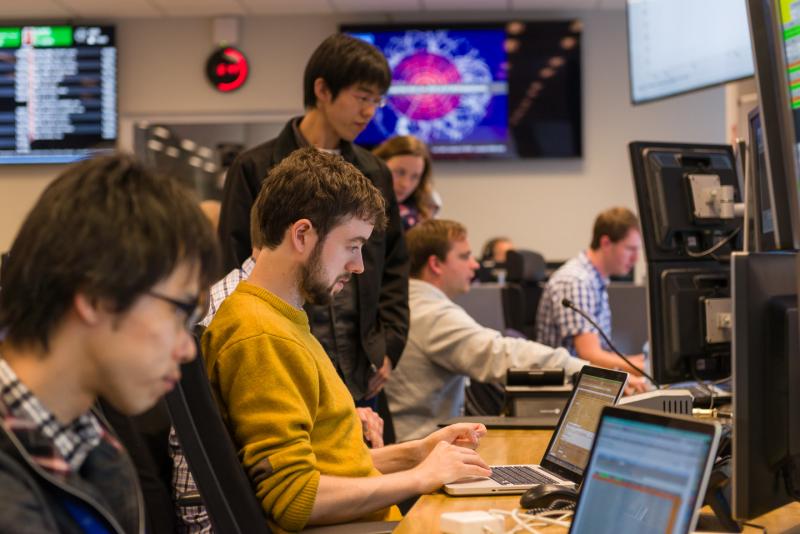 Physicists working in the ALICE experiment control room, getting their detector ready to take data from collisions that are due to begin in the Large Hadron Collider later today (Image: Laurent Egli/CERN)

Today’s the day! The experiments at the Large Hadron Collider (LHC) are set to begin taking data from collisions at the new energy frontier of 13 teraelectronvolts (TeV).

In early 2013, the LHC shut down for two years of planned maintenance and repairs. Now the world’s most powerful accelerator is ready to start its physics programme once again, this time with proton beams colliding 13 TeV — almost double the LHC's previous energy. This new energy frontier will allow researchers to probe new boundaries in our understanding of the fundamental structure of matter.

Last month proton beams were back in the accelerator for the first time after two years of intense maintenance and consolidation. The first beam at the record energy of 6.5 TeV circulated on 10 April, and the first collisions – at the lower beam energy of 450 gigaelectronvolts (GeV) – followed. Finally, on 20 May, the LHC broke the energy record for particle accelerators with collisions at 13 TeV to set up systems that protect the machine and detectors from particles that stray from the edges of the beam.

The milestone, however is planned for later today, when the LHC Operations team declares "stable beams", delivering collisions to the experiments ALICE, ATLAS, CMS, LHCb, LHCf, MOEDAL and TOTEM. These experiments, now fully switched on and ready for the torrent of new data, should today begin their journey to new frontiers in physics.